The Powers of the False 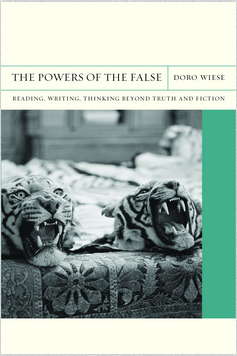 The Powers of the False: Reading, Writing, Thinking beyond Truth and Fiction, by Doro Weise (Northwestern University Press, 2014).

Can literature make it possible to represent histories that are otherwise ineffable? Making use of the Deleuzian concept of “the powers of the false,” Doro Wiese offers readings of three novels that deal with the Shoah, with colonialism, and with racialized identities. She argues that Jonathan Safran Foer’s Everything Is Illuminated, Richard Flanagan’s Gould’s Book of Fish, and Richard Powers’s The Time of Our Singing are novels in which a space for unvoiced, silent, or silenced difference is created. Seen through the lens of Deleuze and his collaborators’ philosophy, literature is a means for mediating knowledge and affects about historical events. Going beyond any simple dichotomy between true and untrue accounts of what “really” happened in the past, literature’s powers of the false incite readers to long for a narrative space in which painful or shameful stories can be included.

Category: Works About Richard Powers Tags: Time of our singing