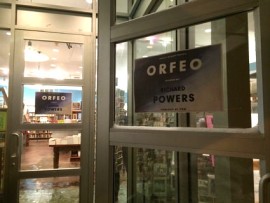 Brehove, October 19, 2015. “What CBT, extended evolutionary synthesis (EES) and Richard Powers’ Orfeo all have in common” is how this English teacher and blogger describes his post about Orfeo, titled “Plasticity Everywhere,” in silenttrends. “The novel is about art, taste, and the relationship of those terms to natural life. What’s so remarkable about Orfeo is that, in the process of figuring these relationships out, Powers offers a kind of aesthetic of plasticity.”

Danny Ashkenasi, September 12, 2015. A post about Orfeo from composer Danny Ashkenasi in his blog Notes from a Composer. “I have never before read literature that so beautifully and evocatively captures music, describing actual works of music, conjuring imaginary works, evoking the process of composing, with such detailed brilliance and clarity and often near religious ecstasy.”

Jack Gabel, May 2, 2015. Composer Jack Gabel writes about Orfeo from Portland, Oregon, in the classical music blog Northwest Reverb. “When first studying music formally, I spent some time with Claudio Monteverdi’s ‘L’Orfeo’. A non-music-specialist housemate, listening in one day, grew curious enough to study the LP liner notes and finally commented, ‘Wow, these guys were like scientists!’ Some forty years later I encounter a novel that engages this notion head on.”

Jonathan Shaw, April 29, 2015, writes from Australia in his blog Me fail? I fly: “If Melville had been writing about the music scene rather than the whaling industry, he might have written this book…it has the pace and suspense of a thriller…Orfeo is gloriously, operatically, romantically over the cliff.”

Lady Fancifull, January 5, 2015. Lady Fancifull blogs from UK about literary fiction, among other topics. “Powers writes so impeccably and presently within the heart of specific ‘real’ pieces, that, surely he must have heard the pieces his central character composes.”

Orfeo is one of ten favorite books of 2014 in “The Year in Words and Sounds,” by David Rothenberg, Terrain.Org, December 28, 2014.  Rothenberg is an author and musician, and professor of philosophy and music. “The latest novel by the greatest novelist of my generation….”

Kyle Gann, PostClassic, December 14, 2014. Gann is a composer and professor of music, and former new-music critic for The Village Voice. “[A] gripping read. … Sure-fire Christmas gift for the composer in your life.”

Liam Kinkead, MegaphoneOZ, November 19, 2014. “Powers’ ability at ekphrasis is virtuoso. … anyone who enjoys good storytelling and strong characters will find something special here.”

Ambarish Ganesh, Indian Nerve, October 10, 2014. “Orfeo is one outstanding orchestra of a book … [it] hops, skips and sings breathlessly.”

Ray Garraty, Endless Falls Up, October 2, 2014. Garraty is a journalist from Russia. “The book raises not only relevant, but also the eternal questions. … Orfeo is dear to mind and heart.”

Lee Monks, The Mookse and the Gripes, September 4, 2014.  Monks is a writer and editor in England. “Powers, as he always has done, is adept at finding new ways of talking about familiar subjects, or rendering fictionally palatable things little discussed.”

Greg Zimmerman, The New Dork Review of Books, August 19, 2014.  Zimmerman is a blogger and contributing editor at Book Riot in Chicago. “Powers’ writing absolutely flourishes when he’s describing a piece of music. … [he] writes in a such a way as to make his subject (whether a composer, a piece, or a piece’s place in history) understandable. …  this is a fascinating, thought-provoking story.”

Larry Nolen, Gogol’s Overcoat, August 18, 2014.  (Also appears in the OF Blog of the Fallen, August 17, 2014.) Nolen is a teacher, translator, and editor from Tennessee. “Powers’ dexterity in mixing musical tonality with a deep, personal story leads to a deeply satisfying tale. … [it] contains a beauty in its prose and thematic execution that make it a joy to read.”

Patrick Olszowski, civility, July 20, 2014.  Olszowski is a photographic artist from UK. “This is a book of real force and skill. Richard Powers’ writing is assured, his phrases are beautifully constructed. … What I loved most about Orfeo was how it made me feel.”

Mark Tiedemann,The Proximal Eye, June 24, 2014.  Tiedemann is a writer. “This is one of the finest prose explorations of that bright nonspace of luminous shadows and delicate splinters of emotion that is the mystery of the musical experience.”

Lindsey Stefan, June 13, 2014. Stefan is a writer and editor from New Jersey. “This gorgeous novel will make you marvel over the precision and beauty of language and all the while, it shyly suggests that you might want to give your dusty keyboard another look.”

Kyle Tieman-Strauss, June 2, 2014.  Tieman-Strauss is a composer and cellist at NYU. “It’s a very clever resolution to an unbelievably well-researched book.”

Thomas Brett, brettworks, May 27, 2014.  Brett is a percussionist, ethnomusicologist, and composer from Canada. “Orfeo is a troubling yet inspiring study of the power of music to shape a person’s life for both good and bad. … There’s so much to think through here in the depths to which Powers goes to explore musical experience in such a comprehensive way.”

Jim Bosiljevac, Disco Demolition Night, May 27, 2014.  Bosiljevac is a writer and creative director at DDB in San Francisco. “I have never read Richard Powers before, but this book blew me away. … [T]he marriage of ideas that Powers brings—apparently his strength across most of his works—is spectacular. The connection between music and cellular biology, the nexus of art and science, is stunning.”

Trish, The Bowed Bookshelf, February 24, 2014.  Trish is a reader from Massachusetts. “Orfeo almost seems like it is written in another language. Just like music is a language, this book has pauses, codas, interwoven threads for different voices, all adding up to a larger piece…”