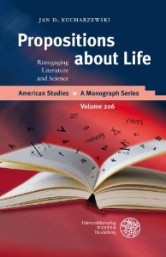 The Science and Literature juxtaposition has always been controversial and the academic discussions on the relationship between the two fields have often faced difficulties related with their incompatibility. However, this polarization has mostly been the result of comparing or contrasting literature and science in terms of discursive, ideological and/or hierarchical contexts rather than identifying the possibility of essential connections. In Propositions about Life: Reengaging Literature and Science, Jan D. Kucharzewski asserts one of his major aims as “understanding the passages that connect the human faculty for science to the human faculty for literature”

The second half of Propositions about Life consists of three major chapters, all devoted to the literary work of Richard Powers. Hereafter, Kucharzewski extensively deals with Powers’s novels as innovative narrative expressions of how science and literature could actually coexist and inspire new visions such as alternative forms of existence as well as of identity and identification in today’s technologically advanced world. Powers’s fictions The Gold Bug Variations, Galatea 2.2, Gain, Plowing the Dark as well as his vision that “art and modern science can complement each other”(9) seem to provide the argument of this study almost with a concrete ground and a productive inspiration.

Including an interview with Powers at the end, the study pays homage to Powers as the book’s major inspiration. Kucharzewski’s affinity to the ways in which the novels of Richard Powers provide “propositions about life” can already be understood by readers who are familiar with the American writer’s work. Throughout these chapters, the book maintains a theoretical discourse of analysis that is analogous to Powers’s “dialogical” expression, according to which the American novelist applies a variety of narrative and fictional strategies in order to investigate “ethical and philosophical questions that science often raises but rarely asks.” However, sometimes the reader cannot distinguish where Kucharzewski synthesizes a variety of ideas originating from Powers himself and where the author advances his own theoretical deliberations about the novels.