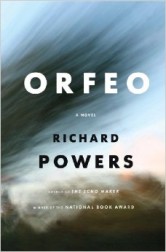 The National Book Award–winning author of The Echo Maker delivers his most emotionally charged novel to date, inspired by the myth of Orpheus.

“If Powers were an American writer of the nineteenth century…he’d probably be the Herman Melville of Moby-Dick. His picture is that big,” wrote Margaret Atwood (New York Review of Books). Indeed, since his debut in 1985 with Three Farmers on Their Way to a Dance, Richard Powers has been astonishing readers with novels that are sweeping in range, dazzling in technique, and rich in their explorations of music, art, literature, and technology. Praise for Orfeo by Richard Powers

“Extraordinary….his evocations of music, let alone lost love, simply soar off the page….Once again, Richard Powers proves himself to be one of our finest novelists.”  —Dan Cryer, Newsday

“Powers is prodigiously talented. Besides being fearfully erudite, he writes lyrical prose, has a seductive sense of wonder and is an acute observer of social life….. Why did I pick it up eagerly each day and find myself moist-eyed when I came to its last pages? That, I think, has everything to do with Powers’s skill at putting us into the mind of his protagonist…  Unbearably poignant.”   —Jim Holt, The New York Times Book Review

“Powers deftly dramatizes the obsession that has defined Els’s life: ‘How did music trick the body into thinking it had a soul?’”  —The New Yorker

“Orfeo is extraordinary and confounding, mind-spinning and wonderful. Just what a proper novel should be.” —James Kidd, The Independent

“Powers proves, once again, that he’s a master of the novel with Orfeo, an engrossing and expansive read that is just as much a profile of a creative, obsessive man as it is an escape narrative.”.   —Elizabeth Sile, Esquire

“Very often, this novel makes you want to scurry to CD player or iPod to listen along… formidably intelligent and ecstatically noisy….” —Steven Poole, The Guardian

“Powers’ writing is complex and heady without being headachy, and his synesthetic descriptions of finding melodies in the mundane are full of their own kind of music.”  —Entertainment Weekly

“Orfeo is a first-class American road novel . . . . And with all this excitement around music, in this retelling of the Orpheus myth Powers also manages enchantment.”   —Scott Korb, Slate

“Orfeo is that rare novel truly deserving of the label ‘lyrical.’ . . . Richard Powers offers a profound story whose delights are many and lasting.”  —Harvey Freedenberg, Minneapolis Star-Tribune

“A master novelist… His wise, enthusiastic writing about music will transport readers.”   —Emily Bobrow, The Economist

“Orfeo benefits from the deep sympathy Powers seems to feel for the brilliant and troubled protagonist he has created.. . .  [It] establishes beyond any doubt that the novel is very much alive.”   —Troy Jollimore, Chicago Tribune

“I believe only (in alphabetical order) DeLillo, Morrison, Pynchon, and Roth – all two decades older – stand above him. Of novelists in Powers’s generation with whom he is often compared – Franzen, Vollmann, Wallace – none equals Powers’s combination of consistent production, intellectual range, formal ingenuity, and emotional effect.”  —Tom LeClair, The Christian Science Monitor

“Richard Powers, whose novels combine the wonders of science with the marvels of art, astonishes us in different ways with each new book.  …  The questions he raises about biological and artistic culture are deeply intelligent, yet his characters in Orfeo are sympathetically human. His female characters…are particularly appealing, competent and strong… Bravo, Richard Powers, for hitting so many high notes with Orfeo and contributing to the fraction of books that really matter.” —Heller McAlpin, NPR Books

“One long express-train ride to the gorgeous. … And the scenery is as sublime as ever. … These are ecstasies that can consume a whole life, but to those who hold a book like “Orfeo” in their hands, it certainly seems worth it.” —Laura Miller, Salon

“Gorgeously modulated…  The book sets its themes early — grief and love, exploration and its limits — and plays variations on them, some of such power it is the only thing that forces you to stop…  A brave novel…  Powers has made these risks seem not revolutionary, but astonishingly, essential.” —John Freeman, The Toronto Star

“Orfeo displays all the excellences for which Richard Powers is celebrated. … But beyond the conceptual fit is the beauty of its expression… [It] has passages that rise to ecstasy. Its descriptions mushroom, transforming grit to psalms. … [Powers] embraces a new playfulness and teases out unexpected glimmers of possibility.” —John Domini, Philadelphia Inquirer

“For sheer bravado in constructing sentences, few authors of contemporary fiction can surpass Powers… The end result is a style that mixes the best elements of Oliver Sacks, Alex Ross and Virginia Woolf. I’m not sure any other writer could pull this off, but Powers has the formula down… One of his finest yet.” —Ted Gioia, The San Francisco Chronicle

“It is a rare thing to finish a book and still be lost in it – to be startled by the drone of a lawnmower or the thunk of the next dishwasher cycle because a story has lifted you, so completely, out of time. … a dense, bracing, gorgeous opera of words….” —Maggie Galehouse, The Houston Chronicle

“Powers reaffirms the magnetic attraction between music and the miracle of life… Orfeo alternates between bittersweet memories of his past and the taut predicament of the present.  There’s a touching juxtaposition in these reflections, an evergreen excitement that sits alongside regret…  The raptures of music seem to invigorate [Powers], and there are extended passages…that are as fine as anything the author has written.” —Sam Sacks, The Wall Street Journal

“The earmarks of the renowned novelist’s work are here—the impressive intellect, the patterns connecting music and science and so much else, the classical grounding of the narrative, but rarely have his novels been so tightly focused and emotionally compelling.”   —Kirkus (starred review)

“Powers has a way of rendering the world that makes it seem familiar and alien, friendly and frightening….the effect is heartbreaking and beautiful.”   —Booklist (boxed, starred review)

“Orfeo is the kind of novel that creeps slowly into a reader’s consciousness and makes a home there. A beautiful, cerebral book. Stunning!” —Lauren Wiser, February 2014 ABA Indie Next Selection

“Experimental music and genetic engineering? Heady stuff indeed, but what is most remarkable about this thought-provoking journey is how intensely it makes you feel about human creativity, experience, and the enigmatic fugitive Peter Els, whose flight from an uncomprehending world anchors the narrative. A perfect introduction to this brilliant but sometimes forbidding author.” —David Wright, Seattle Public Library, Seattle, WA (A January 2014 “LibraryRead”)