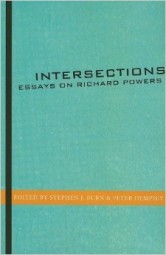 Since his first novel was published in 1985, Richard Powers has assembled a body of work whose intellectual breadth and imaginative energy bears comparison with that of any writer working today. Intersections: Essays on Richard Powers pays tribute to that achievement by collecting seventeen essays—written by leading literary critics, philosophers, and a novelist—each of which offers important insights into Powers’s narrative craft and the intellectual grids that underlie his work. Powers’s novels are distinguished by both their multiple narrative forms and their sophisticated synthesis of diverse fields of knowledge; to attempt to adequately address this range, the contributors to this volume mix their study of Powers’s narrative innovations with eclectic interdisciplinary perspectives, which range from photography and systems theory, to ecocriticism and neuroscience. The volume concludes with an essay by Powers himself, that explores his philosophy of the novel.