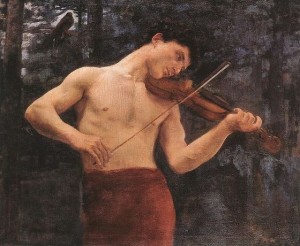 “Harmony and Discord,” by Ivan Kreilkamp, Public Books, June 15, 2014. “Orfeo is, characteristically for Powers, sprawlingly ambitious and wide-ranging…[its] musical history bristles with so much rich detail that it never seems simply allegorical.”

Orpheus was the first rock star, the archetype of all subsequent sexy, irresistible, doomed musicians. His song not only charmed all human listeners, but also, in Ovid’s words, “allured the trees, the savage animals, and even the insensate rocks.” The myth informs some of our most fundamental ideas about the life of the creative artist and performer. Three new novels by Stacey D’Erasmo, Michael Cunningham, and Richard Powers suggest that we can’t stop retelling his story.