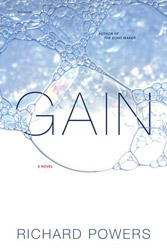 Gain braids together two stories on very different scales. In one, Laura Body, divorced mother of two and a real-estate agent in the small town of Lacewood, Illinois, plunges into a new existence when she learns that she has ovarian cancer. In the other, Clare & Company, a soap manufacturer begun by three brothers in nineteenth-century Boston, grows over the course of a century and a half into an international consumer products conglomerate based in Laura’s hometown. Clare’s stunning growth reflects the kaleidoscopic history of America; Laura Body’s life is changed forever by Clare. The novel’s stunning conclusion reveals the countless invisible connections between the largest enterprises and the smallest lives. “Gain only confirms that Powers is, in fact, a major American novelist.” —Adam Kirsch, The New Republic

“The Road to success, in this land of swashbuckling corporate raiders, is littered with innocent dead…Richard Powers’ deceptively simple and terrifyingly effective novel Gain says it better than anyone has in a long time: buyer beware.” —Rick Moody, Voice Literary Supplement

“Intellectually dazzling…Gain is an impressive synthesis of [a] swatch of history that made America huge.” —Gail Caldwell, Boston Globe

“Powers may be at once the smartest and the most warm-hearted novelist in America today.” —Melvin Jules Bukiet, Chicago Tribune

“What is most remarkable about this novel is how much life is in it, and how much intelligence.” —A. O. Scott, New York Review of Books