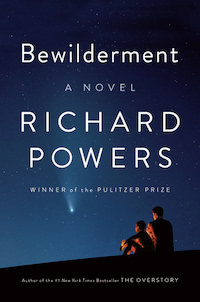 A heartrending new novel from the Pulitzer Prize–winning and #1 New York Times best-selling author of The Overstory.

With its soaring descriptions of the natural world, its tantalizing vision of life beyond, and its account of a father and son’s ferocious love, Bewilderment marks Richard Powers’s most intimate and moving novel. At its heart lies the question: How can we tell our children the truth about this beautiful, imperiled planet? “[A] taut ecological parable…. A touching novel that offers a vital message with uncommon sympathy and intelligence.” —Kirkus, starred review

← Anticipation for The Overstory